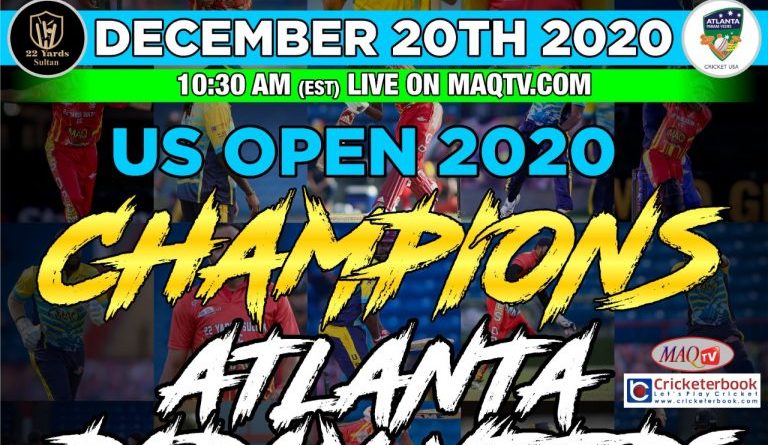 SUNRISE/FL – USA: Atlanta Param Veers with great performances from West Indians Johnson Charles and Chris Gayle won the 2020 edition of the US Open T20 tournament at the Central Broward Regional Park in Fort Lauderdale Sunday.
The Param Veers team missing skipper Rayad Emrit, Akeal Hosein, Khary Pierre, and Kissoondath Magram fought well and got over 22 Yards by 10 runs to lift their first-ever US Open title. Gayle’s 49 and Johnson’s 70 paced Atlanta to 182/6 off their allotted 20 overs and 22 Yards responded with 172/7.
Chasing a healthy target on a slow track was always going to be difficult for 22 Yards but whilst opener Trevon Griffith was at the crease there was hope. He slammed the Param Veers opening attack around the park and after five overs, 22 Yards were 52 without loss. 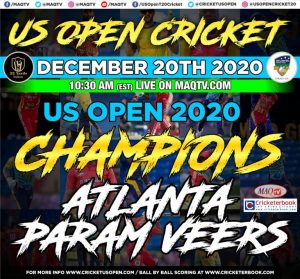 It took the Universe boss Gayle to make the breakthrough sending back Ahad Malek for 28 and wickets followed. Griffith perished for 42 off 33 balls with two sixes and two fours. Former West Indies all-rounder Chris Barnwell breathed life back into the 22 Yards team with a breezy 35 off 20 balls but he was run out in the last over with 20 runs needed off five balls.
For their efforts, Atlanta Param Veers walked away with a winning purse of US$50,000.
Earlier, the was the West Indies duo of Gayle and Johnson who formed the backbone of the Atlanta batting effort. Johnson who opened the innings was brutal on anything short or offline, while Gayle who came in at number three bided his time and exploded when necessary.
The two added 107 runs for the second wicket off 12.3 overs when Gayle who scored 65 in the semis, fell for 49. He cracked three sixes and four fours in his 36-ball special. Charles motored on to clobber 70 off balls with one six and nine fours.
Towards the end of the innings South African Wayne Parnell who has been having a great tournament smacked 27 not out off 12 balls with five fours.
Karachi Kings and Mumbai Indians all-rounder Shurfane Rutherford was the pick of the bowlers for 22 Yards and finished with 4/24.
SCORE: Atlanta Param Veers 182/6 (20) (Johnson Charles 70, Chris Gayle 49, Wayne Parnell 27no, Shurfane Rutherford 4/24) vs 22 Yards 172/7 (20) (Trevon Griffith 42, Chris Barnwell 35, Ahad Malek 28, Andre McCarthy 22, Wayne Parnell 2/27) – Atlanta Param Veers won by 10 runs.